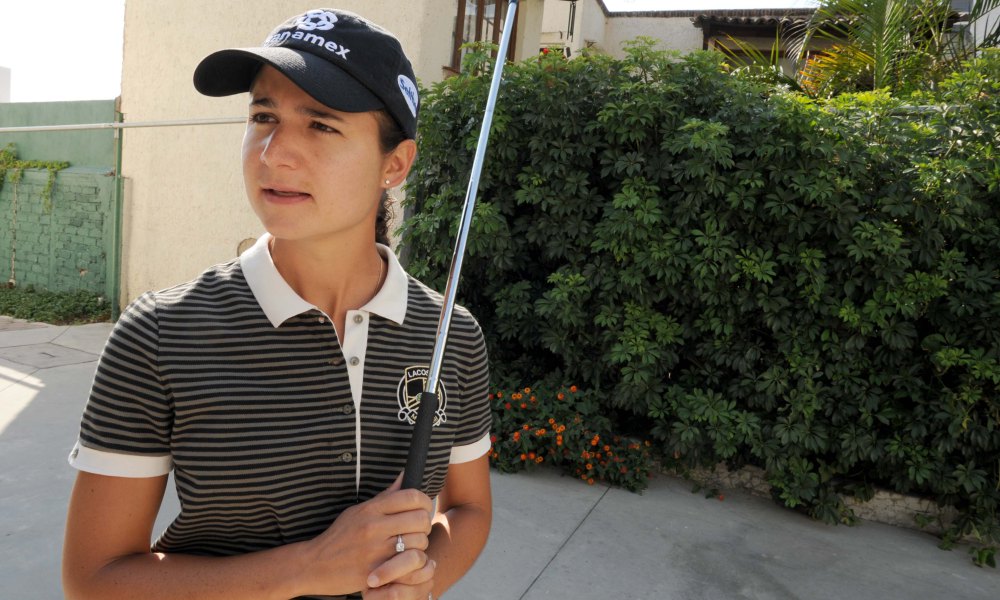 NEW YORK — Even the greatest golfers seldom exit on top, but rather tend to fade away in a blur of misplaced optimism and undignified scores. Lorena Ochoa was a rare exception.

In May 2010, the Mexican phenom had been ranked No 1 in the world for a record 158 consecutive weeks and had claimed 27 LPGA Tour wins — including two majors — in just nine seasons. She was only 28 years old. Then, like Bobby Jones at the same age, she walked away, stunning the golf world by announcing her retirement.

What she lacked in longevity, Ochoa made up in accomplishments, having already done enough to warrant a place in the World Golf Hall of Fame, to which she was inducted in a ceremony Tuesday night.

She accepted the honor with a charming, heartfelt speech that weaved between English and Spanish, often punctuated with her trademark laugh and by cheers from her family and friends, many of whom had traveled from Mexico.

The ceremony began awkwardly for Ochoa when a statement was read from President Donald Trump. A source told Golfweek that the president’s statement was offered at the last minute by the White House and had not been anticipated by organizers. TV cameras panned to Ochoa, whose eyes remained fixed firmly on the ground during the statement reading.

In her speech—which she joked was more stressful than giving birth—Ochoa recounted her unlikely journey to the top from a hardscrabble childhood in Guadalajara. Money was scarce, she said, and poignantly thanked her three siblings “for all the things you couldn’t do because of my golf and you never complained. I remember only love and support.”

She told a large crowd that included legends such as Kathy Whitworth and Jack Nicklaus about her first trip to the World Juniors in California when she was just 8 years old.

“To tell you the truth, I just wanted to go to Disneyland,” she said to laughter. She won the event five times in a row. “And I did get to Disneyland!”

Those junior wins were a prelude to a meteoric rise. After two years at the University of Arizona, Ochoa joined the LPGA Tour in 2003 at age 22. A year later she had her first title, and quickly racked up more than two-dozen wins, including majors at the 2007 Women’s British Open and the 2008 Kraft Nabisco. Her last win came just six months before she opted to walk away.

Her speech was a reminder of the infectious charm Ochoa brought to the game. “She was just very genuine, just being herself,” said Annika Sorenstam, whom Ochoa replaced as World No. 1 in 2007. “Her playing style reflected her, just playing with her heart. A ‘go for it’ attitude.”

Sorenstam retired in 2008 at just 28, setting another standard her successor would emulate. The Swedish legend says she has talked with her friend and fellow Rolex ambassador about finding fulfillment outside of competitive golf. Ochoa married Andres Conesa Labastida, the CEO of Aeromexico, in 2009 and the couple have three children.

“We both reached our peak and realized we wanted to pursue something more, and family was really important,” Sorenstam said. “You have this window and you make the most out of it and you realize that there are other things that fulfill you. I was complete with my career and I think she felt very similarly. It wasn’t all, it was just a little piece of you. If you look at Lorena today, of course she was the golfer. But you think of her with her family and her philanthropy work. It’s much more multifaceted than hitting golf balls.”

The Hall of Fame class of 2017 also included Ian Woosnam, Meg Mallon, Davis Love III and the late British writer Henry Longhurst. At 35, Ochoa was by far the youngest inductee of the evening. By comparison, the first of Mallon’s 18 LPGA wins came when she was 28 years old—the same age at which her fellow inductee retired. That raises the question of what more Ochoa might have achieved in a longer career.

But the passion she once devoted to golf is now directed toward her foundation, which champions educational opportunities for underprivileged children in Mexico. Several thousand kids have benefitted from its programs, which is why Sorenstam thinks Ochoa might have an even greater impact outside the game than she has within it.

“She has the opportunity to continue to inspire people who maybe don’t have the resources,” Sorenstam said. “She touched a totally different demographic. She embraced her culture and brought that culture to golf. She will have the opportunity to do amazing things.”