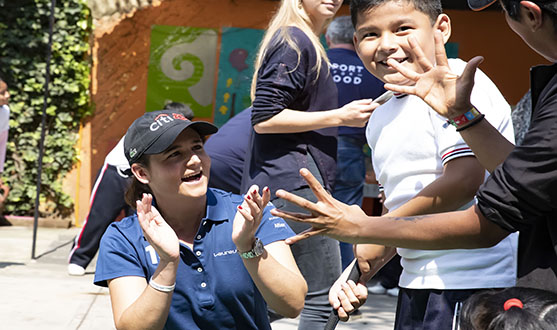 With the eyes of the sporting world on Mexico this week for the Formula One Grand Prix, the Mexican capital was a fitting backdrop to induct Latin America’s best-ever female golfer into the Laureus World Sports Academy.

Lorena Ochoa was joined in Mexico City by Olympic gymnastics legend Nadia Comaneci and former All-Blacks captain Sean Fitzpatrick at Proyecto Cantera, a football programme working with 14 different institutions, safe houses and schools for the deaf around Mexico City. The three sporting legends spent the afternoon with deaf young people, joining them in their bi-weekly football and educational sessions.

Later that day, Ochoa was officially unveiled to Mexican media at the St. Regis Hotel in the heart of Mexico City.

The press conference, which was supported by Mercedes-Benz Mexico and IWC Schaffhausen, also highlighted the great work being done in the country through five of the sports-based community programmes Laureus supports in the capital, which help over 1,000 disadvantaged youth.

Lorena Ochoa played on the U.S.-based LPGA Tour from 2003 to 2010 and was the top-ranked female golfer in the world for 158 consecutive and total weeks, both LPGA Tour records, from April 2007 to her retirement in  May 2010, at the age of 28. As the first Mexican golfer to be ranked No.1 in the world, Lorena is widely considered the best Mexican golfer and the best Latin American female golfer of all time. She was inducted into the World Golf Hall of Fame in 2017.

Lorena joins the 65 current members of the Laureus World Sports Academy as the first representing women’s golf. Academy Members volunteer their time to promote the work of Laureus Sport for Good, which uses the power of sport to end violence, discrimination and disadvantage, proving that sport can change the world. Laureus Sport for Good currently supports more than 150 programmes in over 40 countries.
Sean Fitzpatrick, Chairman of the Laureus World Sports Academy: “I am delighted to welcome Lorena into the Academy here in her home country of Mexico. Lorena is a legend of golf and one of Latin America’s best ever athletes. She reached the pinnacle of her sport and I know she is as dedicated to helping us use sport to help young people as she was in her own career. We are very excited to have her on board. ¡Bienvenida Lorena!”

Laureus Academy Member Lorena Ochoa: “I’m so excited to be announced as a Laureus World Sports Academy Member, it’s a huge honour for me to join these great sporting legends who all believe in the power of sport. Having been involved in sport since the age of five, I am aware of the incredible impact it can have on young people, and today’s visit to the Laureus-supported Proyecto Cantera was proof of that.

“Using the power of sport to end violence, discrimination and disadvantage, Laureus Sport for Good is proving that sport can change the world. I’m looking forward to working with my fellow Academy Members to support Sport for Good around the world in my new role.”